During Covid, Iceland is one country that has tried to remain open to tourists. At the time of this post, all passengers arriving in Iceland must choose a 14-day quarantine OR a double COVID-testing procedure along with quarantine for 5-6 days (with some exemptions) so unless you can work remote in your hotel going may still not be an option. The first COVID test is at the border on arrival and the second by the primary healthcare service 5-6 days later.

In the Þórsmörk valley in Iceland there is a small restaurant and a very basic grocery store, as well as shelters, camping sites and a 4 × 4 bus stop for those who want a quick return to civilization. Those still energized will find another 16-mile hike along the spectacular Fimmvörðuháls route, which leaves the valley behind and heads to the Mýrdallsjokull and Eyjafjallajokull glaciers, crossing a phantasmagoric lava field born of the world-famous 2010 eruption. that this last section is more demanding than the previous ones, the landscapes make the effort worthwhile from the first slope until the last long descent, on which we can admire a total of 24 sensational waterfalls.

The mythical waterfall Skógafoss will be the culmination of this unforgettable journey, which can be made from June to September and is celebrated every summer with yellow posts. However, if the weather is bad or foggy, you may not see anything. That’s why we recommend that you carry a GPS device that tracks the route, although you should keep in mind that it can vary slightly from year to year, especially when it comes to crossing rivers.

Due to the fact that beer consumption was prohibited in Iceland for the greater part of the 20th century, the Icelandic drinking culture is still in its infancy.

To this day, Icelanders maintain a strange and premature relationship with alcohol, and alcoholic beverages are exclusively sold in state-run stores called Vinbudin (The Wine Store). 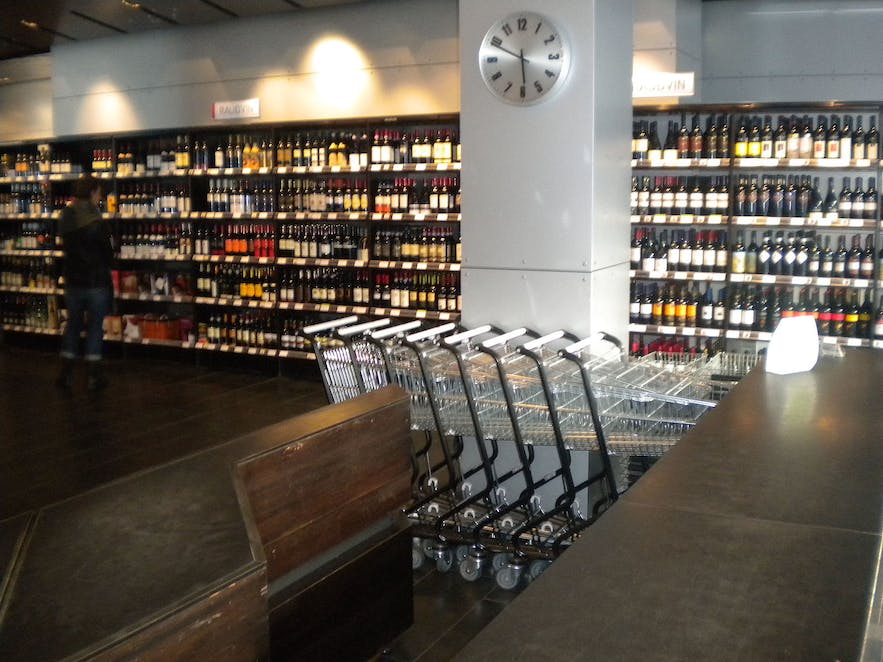 Supermarket shelves, are however stocked with various brands of relatively cheap near-beer.

These are products that aim to replicate the taste of beer while totally eliminating its intoxicating effects.

Many travelers don’t know this. As a result, it’s relatively common to see foreign visitors victoriously pushing full shopping carts, stuffed with the watered out near-beer, through Icelandic supermarket aisles, oblivious to the true nature of their loot.

The near-beer might keep the party from taking off with a bang, but the upside is that it will never keep you from getting out of bed the following morning. Plus once you open one you may not want another.

Okay, back at a real travel tip. In the northern part of Vatnajökull National Park, a few kilometers from the Krafla geothermal area and Lake Mivatn, the Jökulsá á Fjöllum flows through an impressive canyon. When it reaches Detifos Waterfall, 100 meters wide and 44 meters high, amazing half a million liters of melted water it thunders every second, creating a giant cloud of splashes that turn the faint rays of the sun into great rainbows.

The spectacular waterfall with the largest volume of flow in Europe worth a visit, but once there you will feel the inevitable temptation to follow the waters on foot, through the Jökulsárgljúfur gorge, walking along a narrow and closed path that stretches between wild waterfalls and frightening basalt walls resembling ghostly trolls who have been turned into ghosts. stone.

Until you reach the magnificent Asbirgi Gorge, the walk is 23 miles long and ideal for a two-day hike, staying overnight in the campsite in Vesturdalur, which is at the midpoint of the route. Although it is a hike with marked routes, it does not count for any kind of service, which means that you have to bring your own food, water and clothes. There is a 4 × 4 bus that connects the start and end points with Mývatn.

Half a million liters of water thunder down Deitfoss every second.

The Jökulsárgljúfur Gorges are a route that can be traversed in two days.

Iceland Tips 4/6: Swim in a volcano

The inhospitable crater of Askja is without a doubt the true heart of the Icelandic mountains. It is amazing to think that this barren zone has formed only 140 years ago after the terrible pyroclastic explosion that catapulted rocks all the way to continental Europe and poisoned the northern part of the country’s livestock with its ashes, forcing many Icelanders to emigrate to the American continent.

To reach Askja, you must follow the F88 along the west bank of the river Jökulsá á Fjöllum, which occasionally overflows, partially submerging the road. In summer there is a 4 × 4 bus that takes you from Lake Mivatn to Dreki’s shelter, passing the beautiful and easily recognizable Mount Herðubreið, known to Icelanders as The King of the Mountains.

In Dreki you will find the beginning of a marked 9 km one-way trail that passes through a highly photogenic volcanic zone. The walk ends on the shores of a giant sapphire-colored lake: Öskjuvatn. A few meters away is the flooded crater of Viti. You can swim in white sulfur waters; the temperature is usually around 22ºC. If you travel by bus, you can go and return in less than 24 hours, but you will find campsites in both Dreki and the Herbubrey oasis in case you want to explore the area further.

Find your deal for Iceland now:

Iceland Tips 5/6: Pedal along the Westfjords

Apart from the interior of the desert in the country, Westfjords are the most isolated, lonely, and inaccessible part of Iceland. The bad reputation of the area is due to its irreconcilable weather, even in summer, and a large number of unarticulated roads. All this gives these lands an almost mystical aura that protects them from overcrowding, although it is difficult to understand how long. Therefore, just as two decades ago the panoramic Ring Road was a paradise for the tourist cyclist, now is the time for the winding roads of the rough and harsh Westfjords coast to enjoy the spotlight.

Cycling through these latitudes guarantees almost empty roads and full contact with nature. To plan a bike route, we highly recommend visiting the official state roads website Road.is and, of course, the National Meteorological Service Vedur.is.

To get to Westfjords, it may be a good idea to start pedaling in Borgarnes, which you can reach by bus from Reykjavik. You can start by crossing the Snaefellsness peninsula then take the ferry from Stykkishólmsbær to Flókalundur, stopping at the small island of Flatey. Once you reach Westfjords, the route invites you to continue to the cliffs of Latraberg, the westernmost point of Europe where we can observe a colony of friendly puffins up close. Then we continue to go around the coast to make our way to Bildudalur and Hrafnseiri, stopping at hot springs such as Reykjafjarlaug and the spectacular Dinjandi waterfall. Then the road takes us Asafjordur – the capital of the region –, the seal colony in Litlibaer and the Reykjanes thermal peninsula. The route that crosses the Westfjords ends in Staðarskáli, a ring road service area where you can take the bus back to Reykjavik.

Puffins can be seen in Hornstrandir, but also in Latraberg.

No one lives there except forest rangers, birds and arctic foxes. The Hornstrandir Peninsula can only be reached by boat and is the northernmost point of the Westfjords, as well as the most isolated and barren point of this remote region. Beyond the port of Hesteyri – where you can sleep in the old doctor’s house, built in1901 – there are no shops, restaurants or hotels. Only basic camping places. That is why the Hornstrandir Nature Reserve is exclusively for nature lovers who are used to outdoor life and the vagaries of the Arctic. Some agencies, such as West Tours, organize guided tours that last 4 or 5 days.

Article Name
Iceland tips: Iceland for the adventurous
Description
Due to the fact that beer consumption was prohibited in Iceland for the greater part of the 20th century, the Icelandic drinking culture is still in its infancy. To this day, Icelanders maintain a strange and premature relationship with alcohol, and alcoholic beverages are exclusively sold in state-run stores called Vinbudin (The Wine Store)
Ron Kloth
Publisher Name
European Travel Blog
Publisher Logo